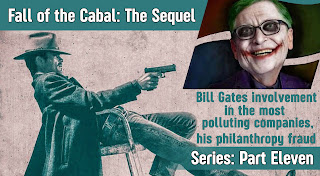 Fall of the Cabal: The Sequel [11] Bill Gates involvement in some the most polluting companies & His philanthropy fraud

Re: Further exposure of Bill Gates, being involved in some of the most polluting companies in the world. Exposing his money fraud and redefining philanthropy.Episode 11 of 17, by Janet Ossebaard(Released Date)
Copyright Disclaimer under section 107 of the Copyright Act 1976, allowance is made for “fair use” for purposes such as criticism, comment, news reporting, teaching, scholarship, education and research. Fair use is a use permitted by copyright statute that might otherwise be infringing.

Email ThisBlogThis!Share to TwitterShare to Facebook
Labels: Fall of The Cabal