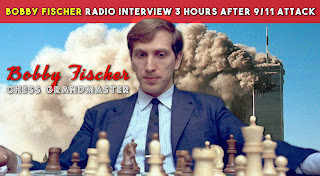 Just hours After the 9/11 attacks, Bobby Fischer, U.S. Chess Grandmaster conducted a radio interview in Baguio City Philippines by telephone. This is the unedited version from that interview.
Robert James Fischer (March 9, 1943 – January 17, 2008) was an American chess grandmaster and the eleventh World Chess Champion. Many consider him to be the greatest chess player of all time.
Less than three hours after the September 11, 2001 attacks in a LIVE radio station interview broadcast in Baguio City, radio host Bombo Radyo interviews U.S. Chess Grand Master, Bobby Fischer. Bobby Fischer's IQ was between 180 and 187.
Robert "Bobby" James Fischer was born on March 9, 1943, in Chicago, Illinois. Fischer first learned the game of chess at age 6 and eventually became the youngest international grand master at the age of 15. In 1972, he became the first American-born world chess champion after defeating Boris Spassky.
According to a few different sources on the web, Bobby Fischer's IQ was between 180 and 187. This was his IQ score in the Stanford-Binet scale when he was 15 years old while attending the Erasmus Hall High School in Brooklyn. He was tested in 1958 by one of his teachers, a highly regarded political scientist who coincidentally happened to be working in the grade adviser's office at Erasmus Hall. At the time, he was US champion, and he won again in 1959.
Bobby Fischer was 64 when he died. For decades he had lived in obscurity, ultimately settling in Reykjavik after renouncing his American citizenship. Gardar Sverrisson, a close friend of Mr. Fischer's, confirmed the death, telling wire services that the cause was kidney failure. Some believe he died from complications of being poisoned.
Copyright Disclaimer under section 107 of the Copyright Act of 1976, allowance is made for “fair use” for purposes such as criticism, comment, news reporting, teaching, scholarship, education and research. Fair use is a use permitted by copyright statute that might otherwise be infringing.
at September 11, 2001