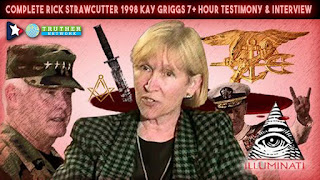 Kay Griggs Interview (1998)
Katherine Pollard Griggs (Complete 1998 Interview and Testimony)
Public Domain video of the Kay Griggs Interview (1998) by Rick Strawcutter. This is the first of two interviews and testimonies of Kay Griggs. Kay Griggs was a military wife who learned way too much about her husband's job. Her husband would drink too much and he started talking openly about the real workings of the U.S. military, leadership training, drug-running and weapons sales, and the secret worldwide camps that train professional assassins. His stories were about murder, corruption, assassinations, and government lies. After he disappeared for a short time, she began receiving threats and decided to tell her story.
Kay is a professing Christian and was married to Marine Corps Colonel George Griggs in the late 1980s, who raised to an influential position as Chief of Staff. She came to realize that he was entirely mind-controlled. He abused and battered her when he drank. These unedited interviews with Pastor Rick Strawcutter of Adrian, Michigan, were conducted in 1998. Kay reports of world events and our current global scenario.
Source: (Public Domain) Historic Educational Interviews
Copyright Disclaimer under section 107 of the Copyright Act of 1976, allowance is made for “fair use” for purposes such as criticism, comment, news reporting, teaching, scholarship, education and research. Fair use is a use permitted by copyright statute that might otherwise be infringing.
at June 15, 1998